Spatial autocorrelation is an important concept in spatial statistics. It is a both a nuisance, as it complicates statistical tests, and a feature, as it allows for spatial interpolation. Its computation and properties are often misunderstood. This chapter discusses what it is, and how statistics describing it can be computed.

If you measure something about the same object over time, for example a persons weight or wealth, it is likely that two observations that are close to each other in time are also similar in measurement. Say that over a couple of years your weight went from 50 to 80 kg. It is unlikely that it was 60 kg one day, 50 kg the next and 80 the day after that. Rather it probably went up gradually, with the occasional tapering off, or even reverse in direction. The same may be true with your bank account, but that may also have a marked monthly trend. To measure the degree of association over time, we can compute the correlation of each observation with the next observation.

Let d be a vector of daily observations. 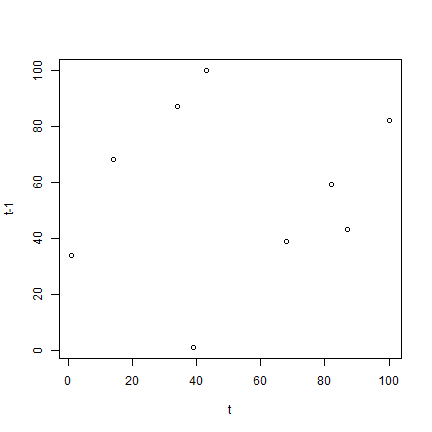 The autocorrelation computed above is very small. Even though this is a random sample, you (almost) never get a value of zero. We computed the “one-lag” autocorrelation, that is, we compare each value to its immediate neighbour, and not to other nearby values. 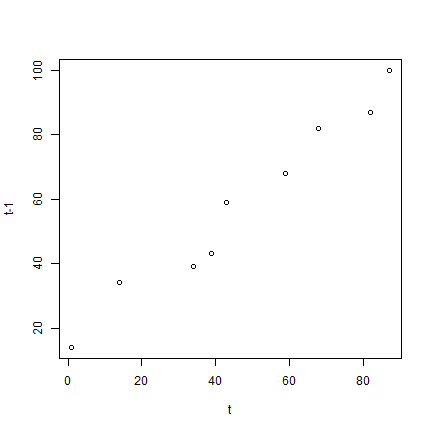 The acf function shows autocorrelation computed in a slightly different way for several lags (it is 1 to each point it self, very high when comparing with the nearest neighbour, and than tapering off). 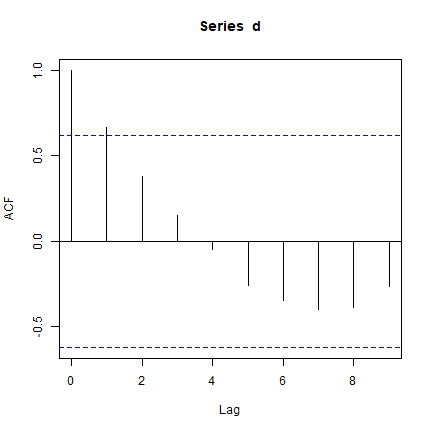 The concept of spatial autocorrelation is an extension of temporal autocorrelation. It is a bit more complicated though. Time is one-dimensional, and only goes in one direction, ever forward. Spatial objects have (at least) two dimensions and complex shapes, and it may not be obvious how to determine what is “near”.

Measures of spatial autocorrelation describe the degree two which observations (values) at spatial locations (whether they are points, areas, or raster cells), are similar to each other. So we need two things: observations and locations. 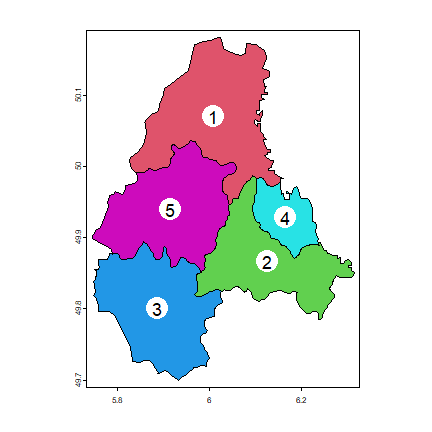 Now we need to determine which polygons are “near”, and how to quantify that. Here we’ll use adjacency as criterion. To find adjacent polygons, we can use package ‘spdep’.

summary(w) tells us something about the neighborhood. The average number of neighbors (adjacent polygons) is 2.8, 3 polygons have 2 neighbors and 1 has 4 neighbors (which one is that?).

Question 1:Explain the meaning of the values returned by w

Plot the links between the polygons. 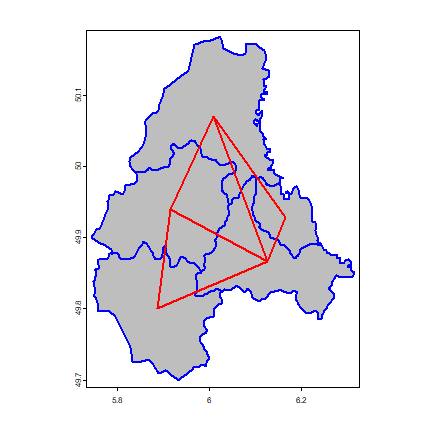 We can also make a spatial weights matrix, reflecting the intensity of the geographic relationship between observations (see previous chapter).

Yes, that looks impressive. But it is not much more than an expanded version of the formula to compute the correlation coefficient. The main thing that was added is the spatial weights matrix.

The number of observations

That is, (yi-ybar)(yj-ybar) for all pairs. I show two methods to get that.

Make a matrix of the multiplied pairs

And multiply this matrix with the weights to set to zero the value for the pairs that are not adjacent.

We now sum the values, to get this bit of Moran’s I:

The next step is to divide this value by the sum of weights. That is easy.

And compute the inverse variance of y

The final step to compute Moran’s I

This is a simple (but crude) way to estimate the expected value of Moran’s I. That is, the value you would get in the absence of spatial autocorelation (if the data were spatially random). Of course you never really expect that, but that is how we do it in statistics. Note that the expected value approaches zero if n becomes large, but that it is not quite zero for small values of n.

After doing this ‘by hand’, now let’s use the spdep package to compute Moran’s I and do a significance test. To do this we first need to create a spatial weights matrix

Now we can use the autocor function.

We can test for significance using Monte Carlo simulation. That is the preferred method (in fact, the only good method). The way it works that the values are randomly assigned to the polygons, and the Moran’s I is computed. This is repeated several times to establish a distribution of expected values. The observed value of Moran’s I is then compared with the simulated distribution to see how likely it is that the observed values could be considered a random draw. 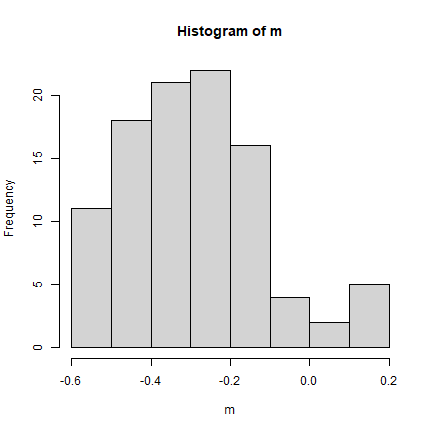 Question 2: How do you interpret these results (the significance tests)?

We can make a “Moran scatter plot” to visualize spatial autocorrelation. We first get the neighbouring values for each value.

And compute the average neighbour value 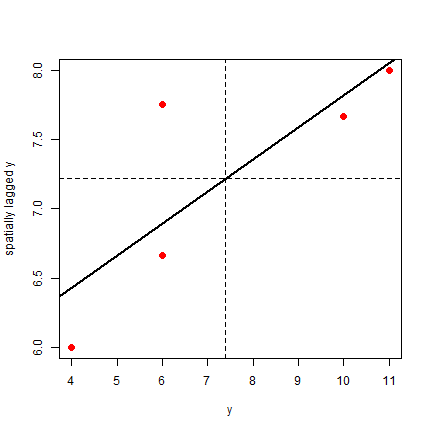 Note that the slope of the regression line:

has a similar magnitude as Moran’s I.